AirSculpture are a UK based electronic music group. Its members - Adrian Beasley, John Christian and Peter Ruczynski - established it in the mid-1990s as a reaction to a music scene that no longer reflected their tastes. The energy and edge of '70s EM had become diluted into a monoculture of clinical digital sounds usually played over safe pre-recorded backing.

Most of AirSculpture's music is created live on stage, improvised with little or no pre-planning. Over time it has evolved to a unique sound melding driving Berlin School rhythms with engaging, flowing melodies; or sometimes moving into darker ambient realms; or shifting gear with danceable beats.

The band has released more than a dozen full length albums; the majority are live recordings reflecting the live nature of the music. There have also been numerous tracks released on compilation albums. 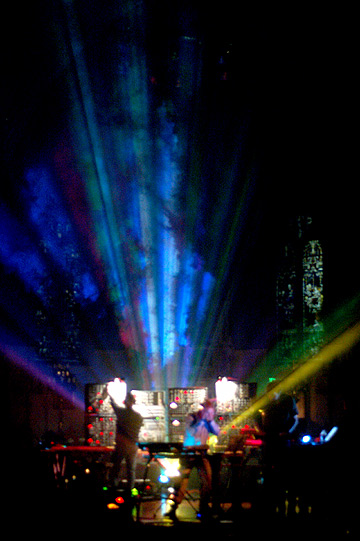 Since 2014 the band have been self-releasing their music. All releases are available from Bandcamp. Many are also in physical form; you can obtain CDs from bandcamp or via specialist electronic music stores.

The older AirSculpture albums on the Neu Harmony label are distributed through the MusicZeit download service. If downloads are not your thing, you can order any of the downloads as a CDR from SMD (some pressed CDs may still be available).

A collaborative project including the members of AirSculpture along with Paul Nagle, Grant Middleton, Andy Bloyce, and a small green alien. The simple idea was to bring a set of musicians together for the first time, give them some rehearsal time and to present the results as a concert. As all of the music was improvised, this was an even more skin-of-the-pants affair than usual.

The results of that first concert and the sessions that preceded it resulted in three albums, available for download at MusicZeit. A second concert saw Andy turning up with his guitar replacing Adrian who was otherwise occupied, and showing the Smokers line-up to be a fluid thing.

Starting life as a Tangerine Dream fan gathering, the RG has grown into a wider playground for electronic musicians and fans. Moving around the world, it brings a varying collection of musicians together to jam, and sometimes to perform more structured collaborations. For the audience it gives a unique chance to see the musicians working (and playing) close up.

There has been an AirSculpture presence at most of these gatherings. Numerous recordings have been released with AS members in various large and small combinations. More information at the Ricochet Dream site.

Ideation is Pete and Paul Nagle. The collaboration has released albums "Adrift" in 2009 and "One Sea" in 2012.

Travelling Light is a new album for 2018. Recorded in 2015, in concert at E-the Day festival in Oirschot, it is available as both a digital dowload or as a single glass mastered CD in a lovely gatefold-style sleeve. You can order either directly, or as usual the CD is stocked by specialist electronic music retailers.

The concert was structured as a single long set plus an encore, and this is reflected on the album. The title track is a moment short of an hour long (it was slightly longer on the night, but we've tweaked it in the studio to shorten a slightly sparse section - though nothing is lost!). The lengthy format allows the music to breathe, slowly exploring the sonic space. The music that emerges is powerful, energetic, atmospheric. Sequences evolve and emerge, serving as a canvas for spacious melodic textures. You get the drift...

Convoi Exceptionel, the encore piece, continues where the main set left off, leaping straight into dense, powerful ever-shifting sequencer bliss. At around 12 minutes it's over all too soon, but CDs and concert halls have limits!

The 2017 season of Awakenings concerts in Rugeley is suplemented by two Lea Hall Bawl events. The Winter Warm up was a multi-way jam featuring John jamming with five others, while the Lea Hall Summer Bawl in August will feature the full band headlining an exciting bill of British electronica. Come and join us! Tickets are available via the Awakenings site.

The Vanishing Point sequence is now complete. Spanning three albums (one a double), this is a detailed document of the US tour in 2011. The result of an intensively creative period performing in concert and live radio broadcasts, this is the most exhaustive release to date, revealing how the themes, sounds and techniques evolve over the course of the visit.

All three volumes are available for listening or purchase at Bandcamp.

Band members meet. Nothing much happens for a while.

This list includes all of the concerts, released recordings, radio broadcasts (actual band performances or appearances,not just airplay) that we can remember. Some is from memory or forensic reconstruction so we'd love any corrections or additions!